With the blessing of George Shambela (in his capacity as Chairperson of the Steering Committee of the UK Chapter),the meeting was co-chaired by Karen Nhakaniso, Paradzai Mapfumo and Panyika Karimanzira. It started at 13.30 hrs.

The main agenda of the meeting was to re-launch the ROHR Zimbabwe Manchester-Liverpool branch whose new committee was led by a young and committed activist, Karen Nhakaniso, as the new branch chairperson. The previous committee members were now going to concentrate on their national and international roles within ROHR Zimbabwe.

The meeting was a culmination of a process, the brainchild of Karen Nhakaniso, that started with the coming together of ROHR Zimbabwe members resident in Manchester, Liverpool and environs to form a branch. After a period of caucusing via a bespoke WhatsApp group they then elected an executive branch committee on 1st November, 2016. This committee then convened this branch launch meeting of 11th February, 2017 which was presided over by two members of ROHR Zimbabwe’s Board of Trustees , Paradzai Mapfumo and Panyika Anselm Karimanzira who officially endorsed and unveiled the new branch committee as follows;

Paradzai Mapfumo (International Coordinator)  and Panyika Anselm Karimanzira (International Spokesperson both updated the meeting on the current Human Rights situation in Zimbabwe and also took the opportunity to educate members on what it means to be an activists and why all mankind should stand and fight for Human Rights. The Universal Declaration of Human Rights and the Aims & Objectives of ROHR Zimbabwe were discussed in considerable detail to benefit those in attendance for their first time.

Mr Mapfumo also highlighted the fact that the re-launched branch would motivate ROHR Zimbabwe members living in Manchester, Liverpool and environs to participate more in planned ROHR Zimbabwe vigils / demonstrations, meetings and workshops organised at branch level and feeding into the UK National / International calendar of activities. The task to ensure this branch would be vibrant and forward thinking was going to be the responsibility of the new branch committee led by Karen Nhakaniso.

Silvanos Mudzvova, a prominent Zimbabwean activist (recently arrived in the UK and based in Manchester) was present at this historic event. When his presence was finally announced, there was a lot of jubilation amongst the attendees. This is a man, who has experienced first- hand what it means, when an individual’s Human Rights are trampled upon. He had suffered tremendously at the hands of Zimbabwe’s state machinery. He had been persecuted many a time. He had been abducted, tortured and injected with unknown substances. He had been left physically disabled as a result of the torture and yet he had continued to fight against the injustices perpetrated by the Mugabe regime. In short, Sivanos Mudzvova epitomises the dangers faced by human rights activists in Zimbabwe.

It was always going to be of benefit to all present that he was given the opportunity to address the gathered activists.

Silvanos Mudzvova’s speech was a gripping tale of the life of an activist in Zimbabwe, always being hounded by the state machinery – almost always having to be on the move, and sometimes hopping from one safe house to another. He had a number of activists in the audience in tears when he described in detail how, in one instance, he had been abducted and tortured and suffered injuries to his legs that had left him disabled.

He also narrated how, on the day he was supposed to fly out from Zimbabwe for the UK, he had been blocked from boarding the plane by the CIO and interrogated for hours. They alleged that he had outstanding court cases (this was false of course). He was only released after intervention by his lawyers, but then it was too late for his flight. With assistance from ROHR Zimbabwe members in the UK and the ROHR Zimbabwe and NAVUZ offices in Zimbabwe and others, he then had to leave the country by road into South Africa the next morning and then caught a flight to the UK from South Africa.

He also conveyed a message of gratitude to the activists in the diaspora from other activists on the ground in Zimbabwe. These included the likes of Gift “Ostallos” Siziva, Ishmael Kauzani, Linda Masarira. He said they wanted the audience to know how much they appreciate the solidarity the” diasporan” activists always showed and the moral and financial support they gave in times of persecution. He cited an example of an instance when Linda Masarira broke down in tears when she received a string of telephone calls of solidarity from activists from five different continents upon release from prison in one of the many instances she had been imprisoned on the basis of trumped up charges. Over and above that, she had also learnt that the activists in the diaspora had contributed money towards the upkeep of her children while she was in prison.

Silvanos urged the gathered activists to continue with the work they are doing. With the help of social media, the vigils,/ demonstrations the “diasporan” activist held here in the UK, complemented the sterling work of and emboldened the activists on the ground in Zimbabwe.

Silvanos Mudzvova also pointed out that he would be based in Manchester for the remainder of 2017. He said that he was going to work with the Karen Nhakaniso led branch committee of the re-launched Manchester-Liverpool branch of ROHR Zimbabwe and that he hoped that the branch would benefit from his experience.

Silvanos Mudzvova concluded his address with a message of hope and encouragement. He urged the audience to continue supporting the struggle back home and to remain focussed. Silvanos said that he hoped that he will live to see the day when the dictatorship in Zimbabwe will fall and he also hoped that, by then, his injuries would have healed enough to allow him to run with the rest of Zimbabweans in celebration of the fall of the dictator.

Upon the conclusion of Sivanos’ address, the audience burst into song and dance (…. Hatidi zvekupiwa order nemasascum), which, in English, translates to “..we do not want to be given orders by deranged authorities”.

Invited guest speakers from other organisations who included John Burke from Zimbabwe Human Rights Organisation (ZHRO), David Kadzutu and Peter Sidindi both from MaZimbabweans Yes We Can (MZYWCAN), an activist and Lawyer Mr Pardon Tapfumaneyi and Chenayi Mutambasere of the nascent Zimbabwean diaspora initiative, the Zimbabwe Citizens Initiative (ZCI) also addressed the meeting, each covering the objectives and activities of their organization and the synergies they derived from working with ROHR Zimbabwe.

Towards the end of the meeting, Chenayi Mutambasere mobilised the audience to follow the suggestion by Silvanos Mudzvova to send WhatsApp messages to the Mayor of Harare, Bernard Manyenyeni whose mobile phone number was shared amongst the audience. The message was then sent simultaneously. It read ‘Leave the Vendors Alone. This related to the ongoing onslaught by the municipal police, the Zimbabwe Republic Police and the army on vendors in urban areas of Zimbabwe.

After all the speakers had taken to the floor, there was a lively Question & Answer session which stimulated interactive discourse in which everyone present participated. It was a historic day that left many fired up for all the ROHR Zimbabwe activities to follow throughout 2017.

The following people entered their details in the register of attendance;-

A number of others opted not to register, citing security related reasons. 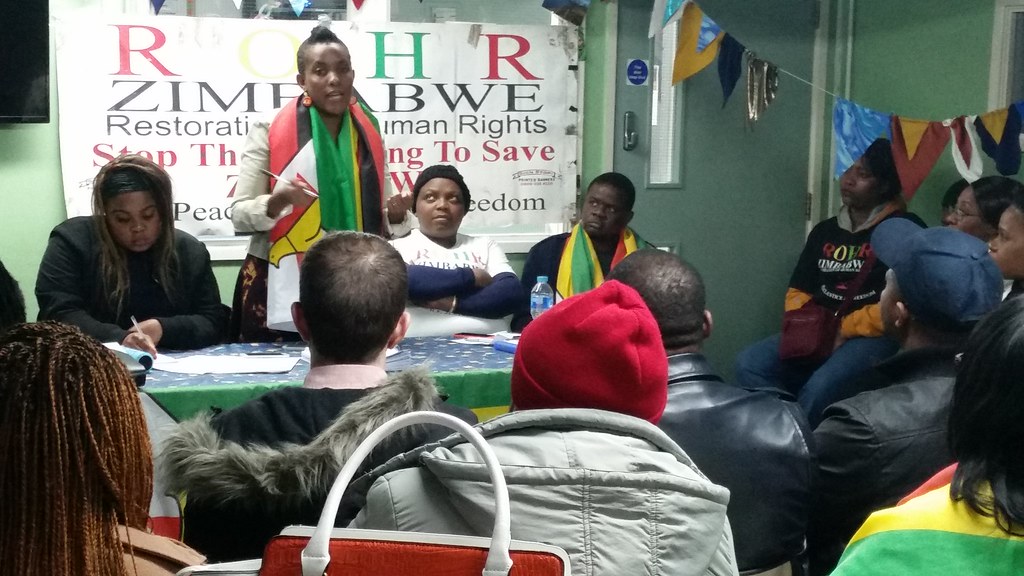