On Saturday 4th March 2017, 9 members of the Central London branch of Restoration of Human Rights (ROHR) Zimbabwe’s UK Chapter, converged at The Royal Festival Hall in central London for a general meeting.

The meeting started at 13.30 hrs and was chaired by the branch’s Vice Chairperson, Plaxedes Damiso.

George Shambela, the branch secretary, who is also the Chairperson of the Steering Committee of the UK Chapter of ROHR Zimbabwe took the minutes.

The agenda items for the meeting included, among other things, the evidently worsening human rights situation in Zimbabwe as the country prepares for 2018 elections.

Itai Dzamara commemoration event, organized by the Zimbabwe Citizens Initiative (ZCI) to be held in Manchester on the 11th March 2017, was among the top issues on the agenda. This event was going to be boosted by a drama entitled “Dungeon” to be staged by none other than Silvanos Mudzwova. Also billed to feature at the same event was a documentary on “Gukurahundi”, a genocide that took place in Zimbabwe from the early to late 80’s.

All members were urged to attend this well publicised event. as it is widely publicised. Mary Muteyerwa (Chairperson) asked those wishing to attend to get in contact with her for travel arrangements and other logistics.

Chairing the meeting, Plaxedes Damiso ( Vice Chairperson)  emphatically urged seasoned members to educate and mentor new activists as this was paramount to the furtherance of the overall goal of ROHR Zimbabwe.

The meeting also discussed the need for the branch to acquire equipment such as a computer, printer and other equipment essential for the smooth running of the branch office. Amid a number of pledges from the floor, Mavis Mutanga (Vice Secretary) donated £20 towards this cause.

Pythias Makonese (Information and Publicity Secretary) urged members to embark on a project venture as a branch to alleviate some the problems identified in Zimbabwe – be it in Education, Health, Transport, Agriculture etc. The meeting agreed to go and research so that they could come back with ideas to start on this. Angela Namatirai Sithole (Fund Raiser) echoed these sentiments and also suggested that training be considered.

One of the members shared his experience of detention at Veme Detention Centre in Dorset pending removal from the UK. He explained how he was rescued by the intervention of Panyika Karimanzira and John Burke of ZHRO.

Another item discussed was the commitment of members and their understanding of the history, aims and objectives of ROHR Zimbabwe and the roles of the individual portfolios of committee members. This underlined the evident commitment of the meeting attendees to executing their duties efficiently. Once again Priscilla Chitsinde shared her experience on the matter and stressed that the key to optimum performance in any role was to understand what the role entailed first. She then suggested a starter pack designed to help members who are new in their roles to quickly adapt. It was then recommended that each member be supplied with hard copies of critical ROHR Zimbabwe literature such as the information pack, aims and objectives and deed of donation and trust.

Mary Muteyerwa also reminded new members to keep their membership subscriptions up to date as this was one of the key requirements of membership as per the organization’s Notarial Deed of Donation and Trust which also serves as the constitution of the organization.

George Shambela (Secretary) noted that there was still scope for improvement of some members’ understanding of such important matters as the history of ROHR Zimbabwe (including its founding members and members of its Board of Trustees past and present) as well as its aims and objectives.

Recommendations were made for the discussion and review of this important agenda item in every subsequent meeting so that committee members remained on top of their game when it came to executing their duties.

George Shambela highlighted the need for more resources to effectively carry out the function of the branch. He indicated that in-order to get optimal performance, ROHR central London branch needed a functional office, furnished with the necessary equipment such as a computer and a printer which would cater for the printing of, inter alia, Notices, meeting agendas and minutes, events programmes, correspondence etc..

On AOB, the members agreed to call for emergency teleconferences to address any matters that needed urgent attention and that arose in between scheduled physical meetings.

The meeting also endorsed the call by Salome Nkiwane (Committee Member) for demonstrations and effective activism on social media to be stepped up so as to put pressure on the Mugabe regime and his ZANU-PF.

Priscilla Chitsinde, a member of the standing Coordinating Committee under the Secretariat in the national executive committee of ROHR Zimbabwe’s UK Chapter, shared a lot of her experiences with the members and she encouraged members to maintain personal lively human rights activism in all areas possible, so as to raise awareness of the appalling human rights situation in Zimbabwe

The meeting ended at 16:00 with a closing prayer from Priscilla Chitsinde with the next meeting scheduled for the 1st April 2017. 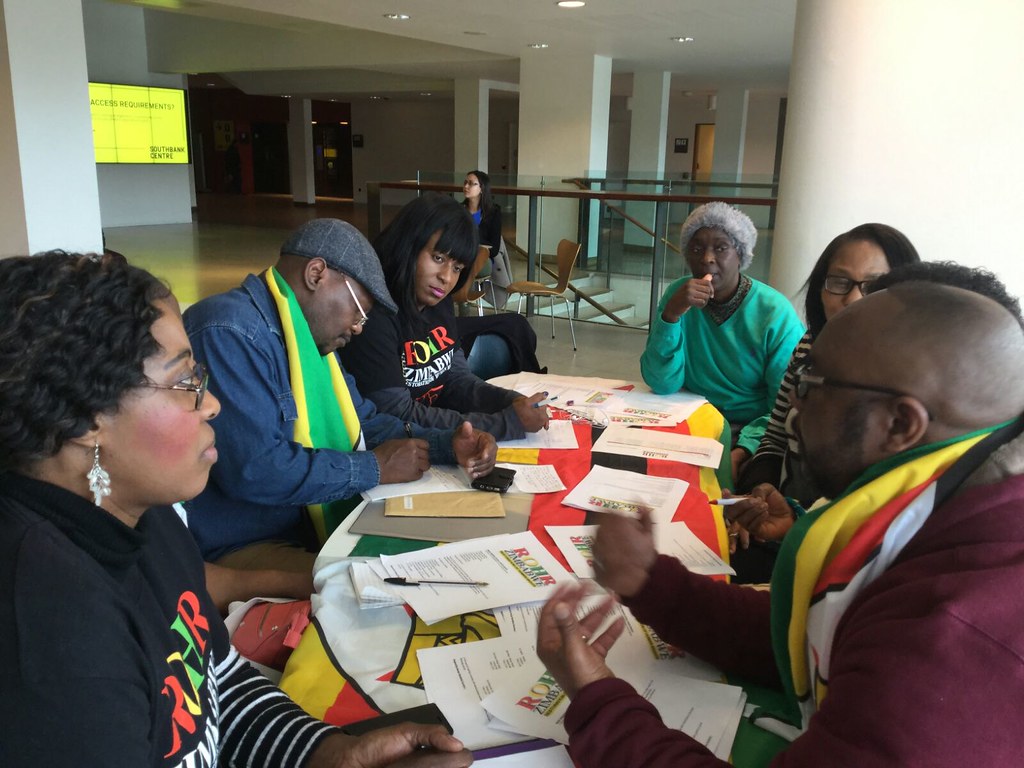